This banner stand is 78" tall by 33" wide and features the image of Pope St. John Paul II. Fully retractable and stored in an aluminum case, it takes less than a minute to extend the telescopic pole and unroll the Pope St. John Paul II Sainthood banner. Each unit includes a nylon travel bag for storage and transport, making the banner stand an excellent tool for priests, professors, and missionaries who travel and give talks promoting devotion to Pope John Paul II and his teachings. As one of the most influential leaders in the 20th century, John Paul II is shown in his Papal garments in portrait style for his canonization. He radiates with the Holy Spirt as the Vicar of Christ gives a smile of peace and joy to onlookers. Although this man of strength grew up in the midst of great sufferings - both his mother and brother died when he was very young and was in Poland during the reign of the Nazis - he became a priest at the age of 26 and became Pope about 30 years later. He wrote many documents during his lifetime, including a series that has now become known as Theology of the Body," due to its focus on what it means to be created "male and female" by God. May this Pope and Saint, who continuously encourages us to turn to our Blessed Mother, be a source of courage and love for us as we continue on in this valley of tears. From top-to-bottom, the banner stand measures approximately 78" tall when fully extended. In reality, the banner stand can be extended several inches more, but a total height of 78" is our recommendation for the best combination of visibility and stability.

This banner stand is 78" tall by 33" wide and features the image of Pope St. John Paul II Waving. F..

This banner stand is 78" tall by 33" wide and features the image of the Divine Mercy. Fully retract.. 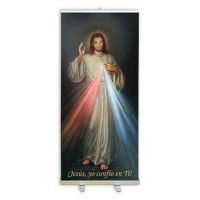 This banner stand is 78" tall by 33" wide and features the image of the Divine Mercy with "Jesus I t..