This banner stand is 78" tall by 33" wide and features the image of the St. Francis by Cimabue from the 13th century. Fully retractable and stored in an aluminum case, it takes less than a minute to extend the telescopic pole and unroll the St. Francis by Cimabue banner. Each unit includes a nylon travel bag for storage and transport, making the banner stand an excellent tool for priests, professors, and missionaries who travel and spread devotion to the saints. As a fresco on display in the lower Church of San Francesco in Assisi, Italy, St. Francis is depicted by the artist Cimabue in his simple humility. St. Francis wears his brown sackcloth, holds the book of the rule for the Franciscans, and bears the wounds and lance mark of Christ. He bears all of these things in holiness to serve his Queen and mother: the image shown is actually a small part of a larger image known as Maestra with St. Francis. "Maestra" is a term for "Mary, the Mother of God," or "Mary, Seat of Wisdom," depicted as the Virgin enthroned with her Child. In the entire image, the Maestra is the focal point of the picture and is surrounded by Angels attending her and her Child, while St. Francis is off to the side as a humble servant would be. Yet, Francis remains joyful and peaceful in his servitude - for what greater joy is there than to serve the Queen and King of Heaven and earth? May this image remind us of how we are called to be "humble and lowly of heart" (Mt. 11:29) in service to the our Creator. From top-to-bottom, the banner stand measures approximately 78" tall when fully extended. In reality, the banner stand can be extended several inches more, but a total height of 78" is our recommendation for the best combination of visibility and stability. 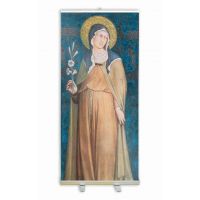 This banner stand is 78" tall by 33" wide and features the image of the St. Clare by Simone Martini .. 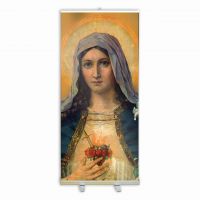 This banner stand is 78" tall by 33" wide and features the image of the Antique Immaculate Heart. F.. 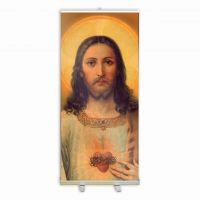 This banner stand is 78" tall by 33" wide and features the image of the Antique Sacred Heart. Fully.. 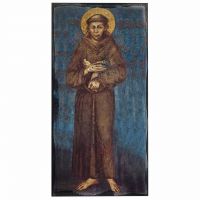 This rustic wood plaque featuring St. Francis comes from trees grown and harvested in Ohio and is 10..